When it comes to industrial power supply, the first idea in mind is excellent performance, high quality and cost-effective, which is also the intuitive impression that MORNSUN fixed input voltage DC/DC converters R1 series left on customers. Then following fixed input voltage R2 series further improve product reliability and decrease the cost by integrated reliability system, independent innovation technology and automated production technology. Although the converters have fully met customers’ functional requirements, they are expected to further focus on the customer experience.


The challenge is becoming bigger in an era of creating the Ultimate Customer Experience. Traditional Royer auto-self-excited transductors and push-pull circuit is likely to cause mutual constraints and unbalance among the performances because of its inherent defects. As a result, it’s difficult to ensure excellent performance in many aspects at the same time, as shown in Figure 1. Meanwhile, the Royer circuit only provides basic functions but protections under abnormal conditions. Once the circuit is abnormal, the power module may be damaged and even cause serious consequences. 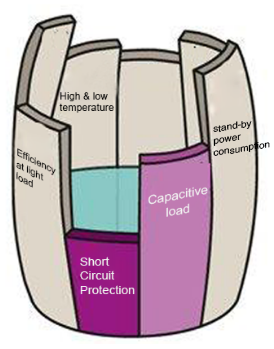 Generally, in power supplies market, people are often be induced to focus on the efficiency at full load, but ignore the efficiency at light load & stand-by power consumption, from which the first is relatively easier.

In some instrumentation applications, the power supply works in three modes, full load (derated in actual use), light load and no load, of which the light load accounting for most time. Therefore, it should take full account of the efficiency at light load. Moreover, if the system is battery-powered, there would have almost strict requirements for stand-by power consumption of the entire machine to improve battery life. Generally, due to technical limitations, common no-load current in the industry is 15-30mA, yet customer would like to have a power supply offering stand-by power consumption as low as possible, e.g.: less than 10mA. Is that possible? Of course, they should take a look at MORNSUN R3 series.

Obviously, the former Royer circuit is unable to meet above-mentioned differential requirements in one product at the same time. MORNSUN engineers endeavor to technological innovation and the NEW R3 series come out by applying an independent oscillator instead of the Royer circuit, integrating internal discrete components. They are the achievements of technology accumulation on IC technology and feature outstanding advantages as follows.

In case of short circuit, a power supply can be damaged or even melted if it doesn’t have SCP. The R3 series are designed with unique SCP control technology and achieve a continuous SCP for all series offering 5/12/15/24VDC input voltage. It effectively avoids chain reactions of front end power source caused by short circuit of back end circuit and protect front end power source from failure and further prevent the system breakdown, thereby improves the system reliability.

Royer self-oscillation circuit has no soft start-up function and has a large transient input current at the moment of start-up, which may breakdown the internal switching components then cause short circuit or even a chain reaction till a complete failure of the system. Yet, the IC fixed input voltage R3 series adopt features built-in soft-start function, setting R3 series free from above problem by avoiding too much impulse current at start-up.

On the other hand, the soft start-up can reduce input energy because of no need for a large input current, lower power redundancy of front end power source and save the cost of overall system design. Fixed input voltage R3 series are suitable for energy constraint applications such as explosion-proof and multi-power modules used in parallel.

Generally speaking, power supply’s capacitive load, soft start-up and SCP are interrelated and restricted, improving any one of which will constrain the other two.
By virtue of innovative technology, fixed input voltage R3 series "decouple" above three performances to eliminate mutual restraint and get the three performances promoted simultaneously. Consequently, R3 series not only achieve a great improvement in SCP and start-up, but also greatly improve the capacitive load，ensuring a normal start-up in CC mode where large capacitive load exists.


For example, a fixed input voltage DC/DC R3 series outputs 5VDC, and then its max. capacitive load rises from 220uF to 2400uF. Another example is as shown in Figure 2. B0505S-1WR3 is connected with an external 4000uF and the CC mode starts normally. 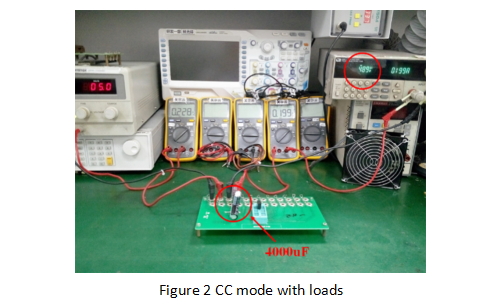 D.The efficiency at light load is increased and stand-by power consumption is decreased. 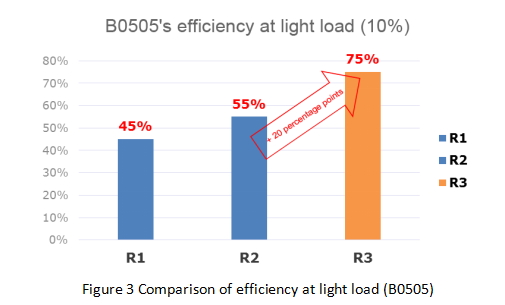 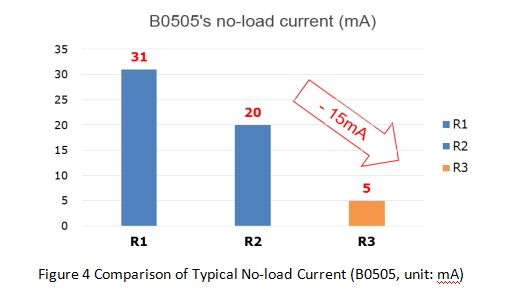 F.Reliability is upgraded to higher.

The high reliability of fixed input R2 series has gained a good reputation, and the new R3 series further upgrade it to a higher level. On one hand, fixed input voltage R3 series are highly integrated, which contributes to reducing internal components by over 40% and internal solder plates. As a result, it reduces the risk of missing and incomplete welds and extends a longer MTBF.

Thanks to IC technology, these R3 series reduce the number of components, simplify the assemble process and save assembly costs. What we did for the new product make it become a cost-effective so as to deliver value to the customers.

H.Pins and packages of R3 series are compatible with the R1 & R2 ones.

Customers usually worry about product performance and compatibility when replacing or upgrading. These R3 series are compatible with MORNSUN previous fixed input voltage R1 & R2 series in packages and pins. It means that the customers do not need to change PCB design when they replace or upgrade the system.

Remain true to our original aspiration and keep the spirit of “keep improving” firmly in mind. MORNSUN fixed input R3 series adopt IC technology not only decoupling conflict among continuous short-circuit protection, capacitive load and startup capability but also increase the efficiency of full load and light load. Besides, it facilitates the customers’ system upgrade with compatibility design.

MORNSUN takes innovation as a responsibility, continually promotes the development of domestic power industry and bring better customer experience. The use of independent oscillator IC technology also guides a new direction for innovation.