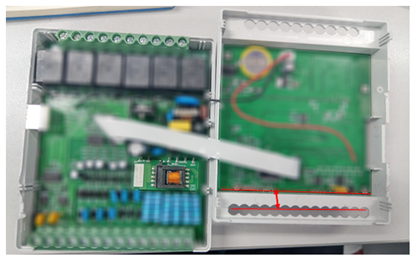 The plastic shell has good antistatic effect, but the insulation distance is the key that 4mm distance can ensure 8KV air discharge

As shown in the figure, a plastic case is used, but the internal components and vias are too close to the shell, resulting in insufficient insulation distance. When discharging, the IC is damaged by arcing of the air and the internal circuit.

Key signals need to be filtered, such as chip selection, reset, and sampling

In addition to the plastic shell, there is also a metal shell grounding for electrostatic protection. Regarding the anti-static problem of metal shells, it’s essential to pay attention to good grounding (including large area grounding, and no oxidized paint).

As shown in the picture, this case shows a customer system with a metal shell and good grounding, but when doing contact discharge, the signal is falsely triggered. At the same time, there is a strange phenomenon: the use of indirect coupling will also cause spurious triggering of the signal, which turned out not to be structural problems. Circuit design (especially sensitive signals) should be paid attention to. After investigation, it was found that the chip selection signal of the chip was affected. After checking the circuit design, it was found there was no filtering protection on the chip selection chip. And then capacitor filtering was used to solve the problem. Through this case here mainly displays that the electrostatic protection structure processing is very important, but the key internal signals such as reset, IC chip types selection, and sampling also need protection. 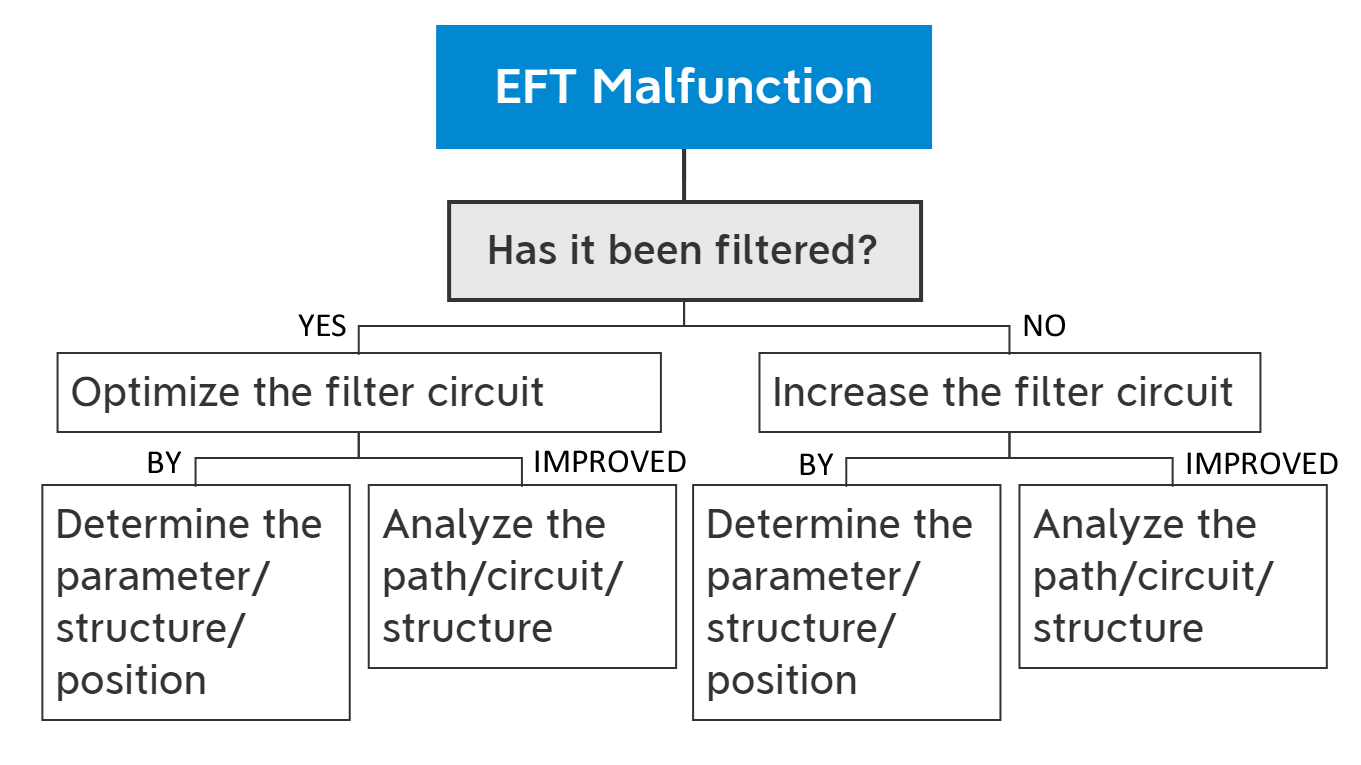 Pulse group and common mode interference are mainly caused by charging the junction capacitance, causing the system failure. It has the characteristics of a few energy, short rise time and wide frequency. Under normal circumstances, the pulse group test will not cause system damage. It is mainly based on reset, crash, false trigger, data exceeding, abnormal LCD screen, etc. How to analyze the EFT failure?

The pulse group affects the system in common mode interference, so it’s necessary to find the common mode path. The paths include explicit path (artificial design) and hidden path (junction capacitance formation). The key idea of analyzing pulse group failure is to look at the essence through the phenomenon, and analyze which part of the circuit is affected through analyzing the failure phenomenon. Then analyze according to filtering, single-board signal circuit design, and PCB design. A situation that it can hardly meet the requirements no matter how rectified may occur, which requires redesigning the product according to the design principles and rectification process before testing.

The picture shows a fire monitoring equipment. There are phenomena of reset, flash screen, data exceeding and false alarms during the pulse group test. Therefore, the failure phenomenon is used to analyze the possible causes:

2) The display drive circuit is affected;

3) The sampling circuit is affected;

4) The buzzer self-check circuit is affected.

Then check the design of these circuits and adopt relative rectification treatments:

1) Increase the corresponding EMC peripheral circuit according to the recommended circuit;

3) Add a small capacitor (1nF recommended) to GND for the display drive circuit;

5) Add a small capacitor to the self-check circuit or button (1nF is recommended).

Through the above measures, the entire test basically meets the requirements, so for such problems, the main reason is to analyze the failure.

Surge (lightning strike) has the characteristics of low frequency and high energy, and it is easy to damage the equipment during testing. Usually three kinds of problems often appear during surge testing: crash, reset and arcing. Next, we will make a simple analysis of the diagnosis of these three failures. 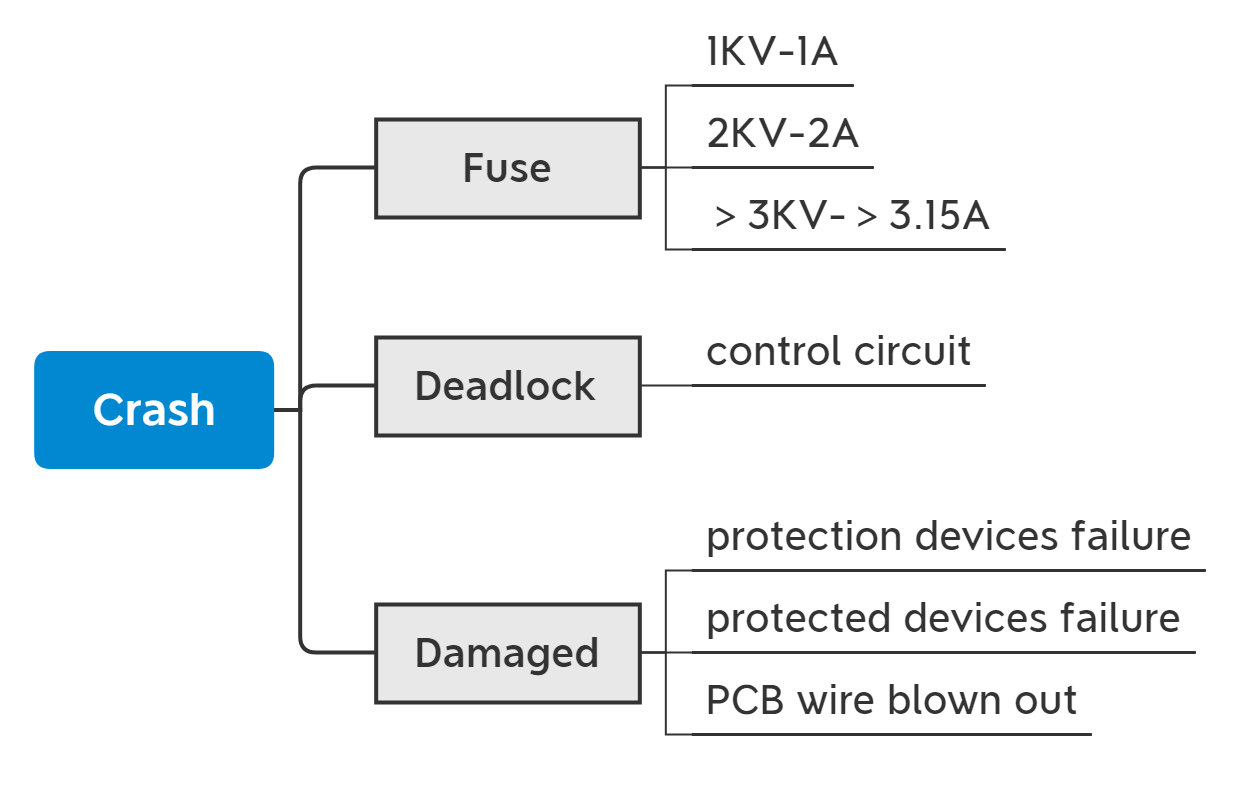 Regarding the crash of the surge test, according to the current problems, there are more cases of fuse broken, system locked, and system damaged. There are corresponding diagnostic techniques for different failure modes.

Fuse blown: Generally, the flow is insufficient. This are the recommended fuse parameters for different surge levels;

System lockup: Generally, the control circuit is disturbed. It is necessary to analyze which control circuits of the system are affected and cause the lockup problem; 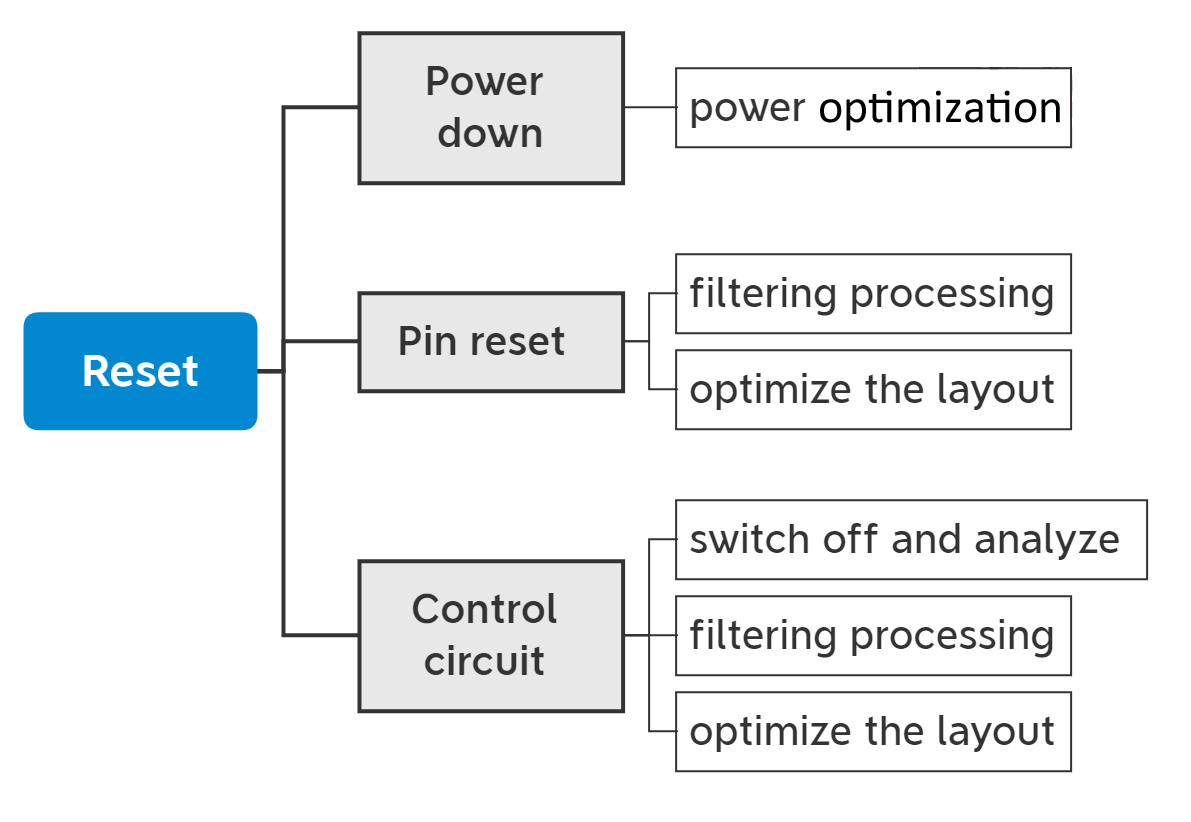 Regarding the system reset caused by the surge test, the output of the switching power supply has no voltage, which is common. For this idea, an oscilloscope can be used to collect the output of the switching power supply. However, it is recommended to use a high-voltage probe for monitoring, since ordinary probes are easily damaged. In addition to the power supply, affected reset pins and control circuits will also cause reset problems, especially some logic control circuits are affected. For this issue, to analyze the circuit principle can determine whether there is such a possibility, and then process. 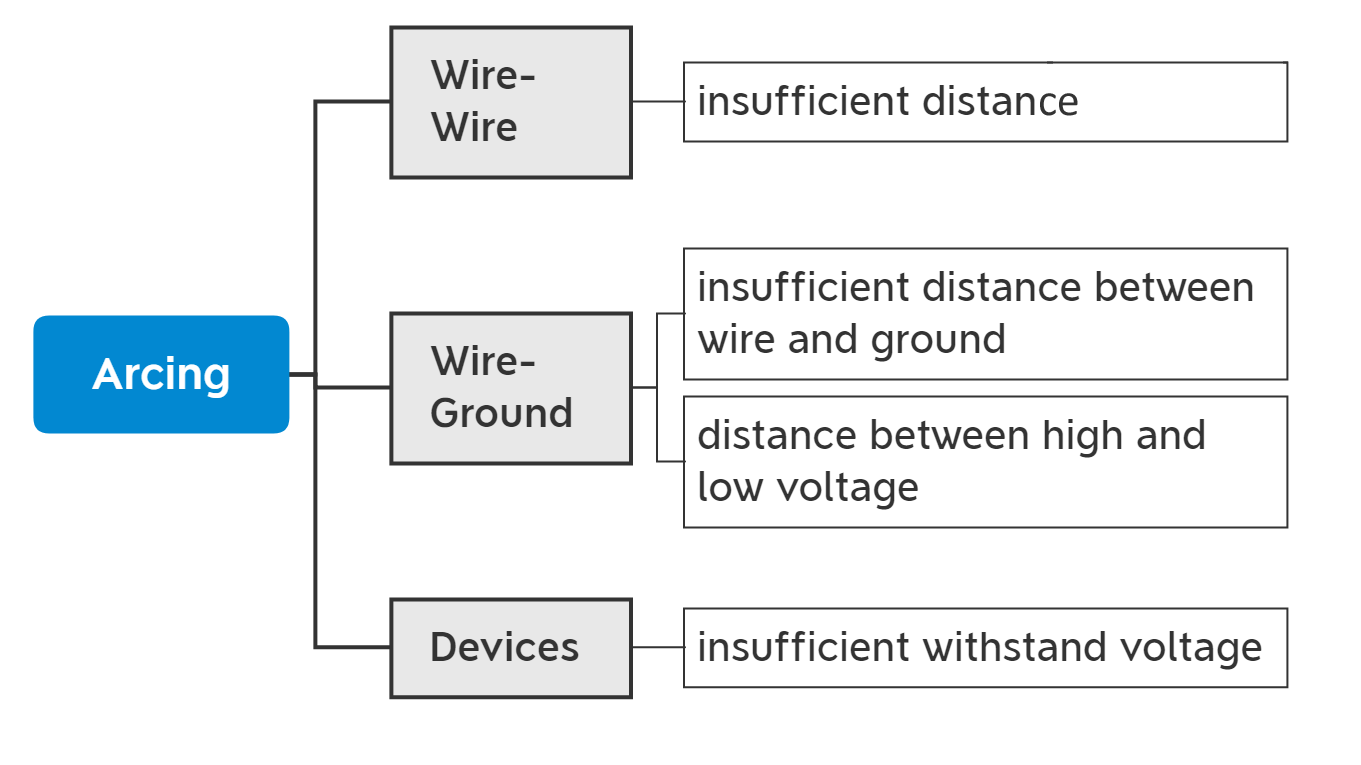 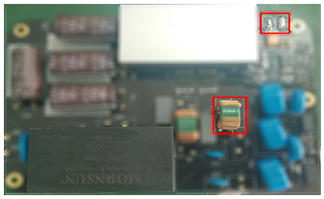 Last time we have learned about concept of common mode filter and common mode EMI, and now let’s figure out how to process common mode arcing. 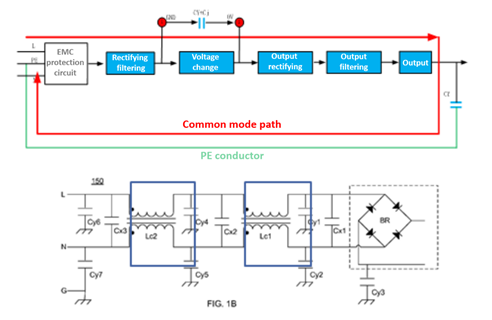 This is a typical switching power supply common-mode surge failure problem. The power and communication industry usually connect the power output ground or signal ground to the metal shell, and the surge of this application requires level-4 or above. This kind of application usually causes the common mode surge test to fail. What is the reason? 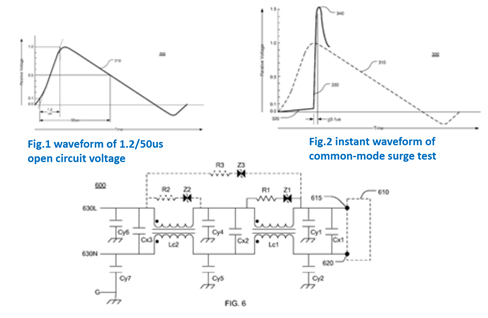 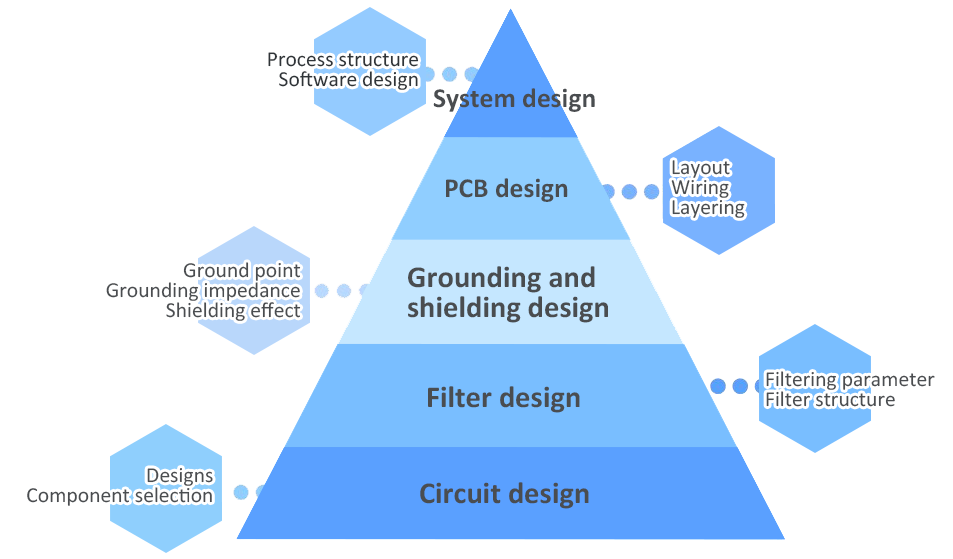 Each link of designs of circuit, filter, grounding and shielding, PCB, and system, has a great impact on EMC performance. The rectification, important too, is the reverse process of design. So after the customer system is formed, the measures we can take are limited when EMC problems occur. Rectification is the most original method and the least economical method. To reduce rectification, the only way is to improve the design!