This article will mainly share the diagnosing techniques and case analysis of EMI.

1. How to determine the type of the noise?

Solutions vary with different types of the noise

As for conductive interference, the general experience within the industry is to take relative rectification measures after determining whether it is differential mode EMI or common mode EMI according to the frequency range that exceeds the limits. This classification, as a conclusion worked out in accordance with a large quantity of test data and rectification experience, has reference value in engineering analysis.

Solutions vary with different types of the noise

The figure above is about radiation test, displaying different shapes of noise such as bun-like wave and spike pulse. We can generally determine whether it is the power supply or system frequency according to the test wave shapes. Different noise has different solutions, and the point is to find out the accurate interference source. Generally, the switching power supply noise is continuous when seen from the frequency spectrum, which is called bun-like wave or broadband noise. While the system frequency is isolated so that it is named spike pulse or narrowband spike.

And how to analyze where the noise emits? Let’s see the following analysis trilogy of EMI.

EMI excess is mainly caused by three parts above: cable, structure, and single board. And when faced with EMI problems, diagnosis would be processed in these three aspects. And then here are diagnosing techniques focusing on the three problems of excess. First let’s see the excess problem caused by cable.

EMI, especially the radiation, mostly emits from the cable. And then you should determine all the kinds of the cable in the system such as signal cable, and power cable. With normal operation, it’s available to eliminate all the signal cables to check if there are still problems. If it turns out the test results in great variation or conformity after one of the cables is eliminated, it means this route has big interference, so that relative solutions can be taken.

If there is no change after all signal cables are eliminated, power cable should be checked. For power cable, a favorable diagnosing measure is to use magnetic ring directly coiling the wire to test in order to improve the effect. If it is improved, it’s greatly probable that the filter in the power end was not treated well. But if there is no effect, analysis of structure or single board is necessary. 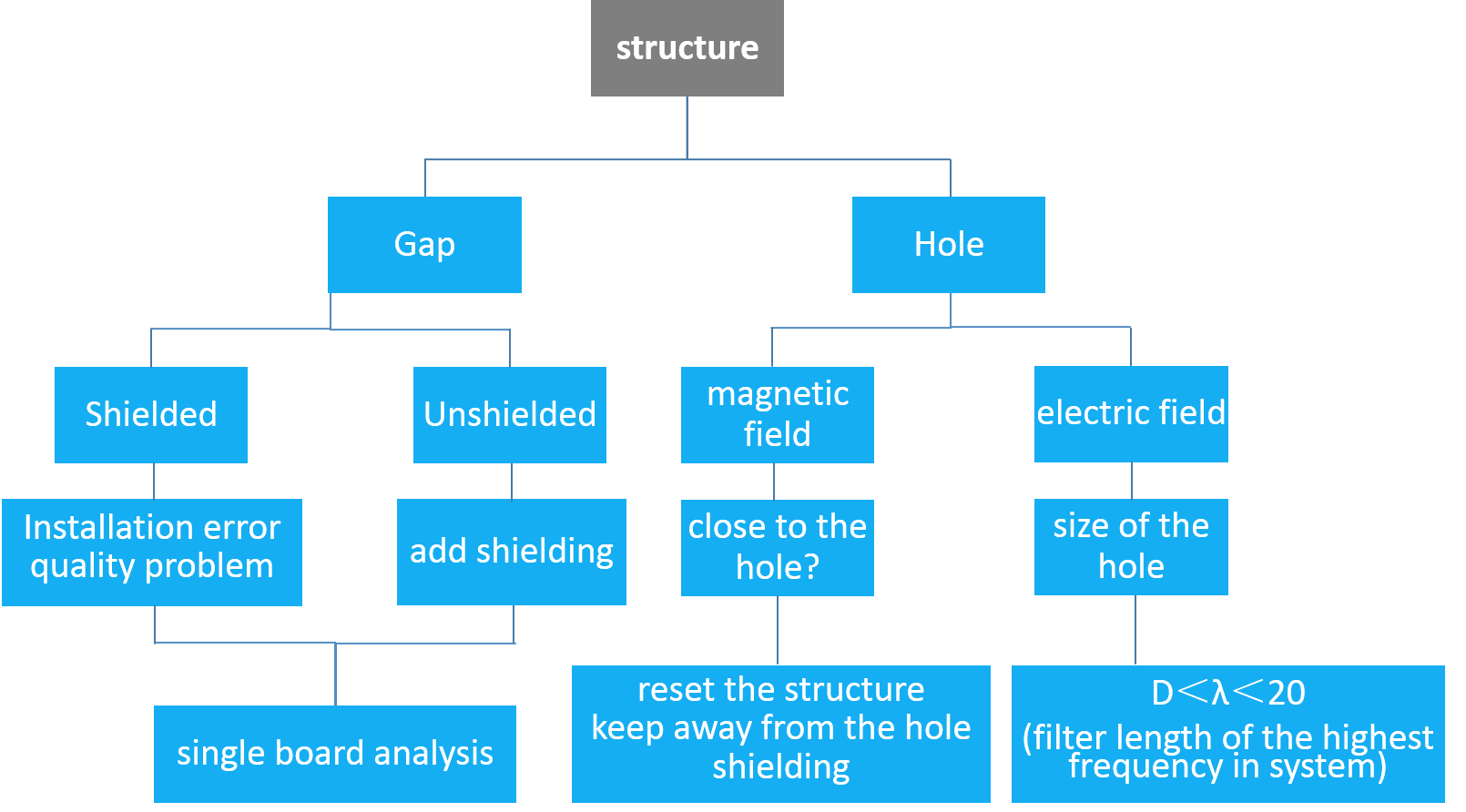 For structural problems, this is relatively few as a rectification measure, but there is no problem with positioning. The excess caused by the structure is mainly the gaps and holes in the metal shell, which can be detected using the spectrum analyzer introduced previously. If the gap is shielded, check the selection and installation of shielding materials. If they are not used, you can use conductive paper with shielding function to see if there is any improvement.

Single board, different from the two aspects above that are from the perspective of conducting ways, belongs to the true noise source. If the cable and structural problems are all eliminated, the board must be positioned to determine whether the board itself meets the requirements. The design must first ensure that the board meets the requirements. Test the board to determine whether the noise is power supply noise or system frequency. If it is power supply noise, the power supply should be processed. Generally, the power supply supplier has a corresponding solution for EMC. If not, you can consult the supplier. If it is the system frequency, the signals such as crystal oscillator and clock should be processed. If it cannot be solved, you can consider adding some additional filtering devices, shielding and other measures to improve.

If there is already a relatively complete filter circuit, but the actual filter effect is not good, it is usually necessary to consider whether the selection parameters, structure and layout of the filter device are reasonable, or whether it is reliably grounded, and the location of the ground point.

Case 1: as the figure shows, the excess appears during the radiation test. Through observing the test oscillogram, it can be roughly judged that it belongs to power supply noise. So first consider processing the power supply. According to the excess phenomenon and positioning ideas, all other wires except the power line were removed, and no major improvement was found. Then put a magnetic ring on the power line, the radiation decreased a lot, so it could be judged that the noise came from the power line.

According to the investigation result, it’s effective to coil the magnetic ring on to verify the power supply noise, and non-signal cable radiation. Therefore, filtering needs to be done to power supply port. By observing the circuit board, you may find three problems need noticing:

1. Three power supplies in parallel cause crosstalk easily to enhance the noise;

Spikes: based on system frequency, starting from system filtering

Case 2: excess appears during the test of radiation, and the radiation oscillogram is shown in the figure. It can be seen from the figure that this is a typical exceeding standard problem caused by the system frequency. The same judgment method is used to analyze cables, structures, and single boards. During the test, except for the power line, there is no external signal line. Before the test, the spectrum analysis was used to detect and it was found that the LCD screen was relatively noisy. Therefore, during the on-site rectification, the LCD FPC was removed, and the test results were very good. Therefore, it can be determined that the noise is radiated from the LCD FPC, which requires processing of the crystal oscillator, the clock signal, and the transmission line.

In the field processing, the signal line with the clock signal was filtered, which produced a significant improvement effect. And then the cable was shielded and connected to the signal ground, which could fully meet the requirements. Through rectification, it turned out that the clock signal should be handled well, and internal transmission lines such as crystal filter, clock filter, and layout wiring can all become good antennas.

Typical filter circuit: X capacitance is set to be close to the power input port and behind the common mode

Case 3: this product needs to meet the CLASS B requirements. Seen from the above figure, it could only meet the CLASS A requirements, and the B-level low frequency band requirements are not met. It is judged from experience that the differential mode noise is the main cause, but from the filter circuit design, it has X capacitors and common mode inductances. So why does it cause problems in this frequency band? The reason is that the location of the filter element also affects conduction.

The design of the filter circuit has two important parameters, the source impedance and the load impedance, and the filter structure design generally follows the principle of high and low impedance configuration, such as LC. We know that when the LISN of the conduction machine is connected to the EUT input port, a 50uH inductor is close to the EUT port. According to the matching principle, a low impedance device, such as a capacitor, should be connected next. Therefore, moving the X capacitor before and after the common mode inductor fully meets the requirements. The experience drawn from this case is that in the design or rectification of the filter, the filter structure can be adjusted appropriately, and the principle of maximum mismatch of the EMI filter should be followed.

Output grounding will generally cause conduction, surge, and EFT to deteriorate

Case 4: many systems are now designed to directly connect the output ground or signal ground of the power supply to the metal casing (PE) or indirectly through RC based on safety regulations, product function realization or EMC performance requirements. This design method, often has the problem of exceeding the standard of conduction interference test. When the power output ground or signal ground is not connected, the test can be passed. This case is a typical failure of the conduction interference test caused by a power output ground connection to PE.

Then why would the output ground connection to PE cause the conduction disturbance to deteriorate? There are two main reasons:

Generally, switching power supplies are only set the rectifier filtering at the output end, and some special EMC filtering wouldn’t be set;

Therefore, in the case of output grounding, both input and output filtering must be considered, and at the same time, it is necessary to enhance the power filtering and increase the output filtering.